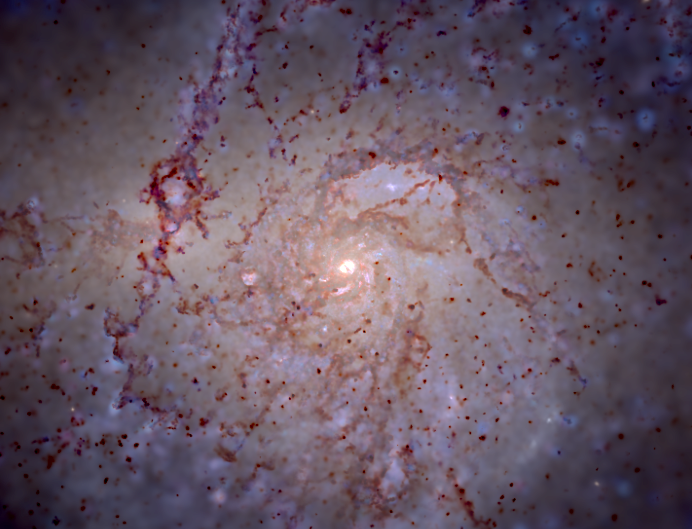 MassiveFIRE: The image shows a massive galaxy created by a hydrodynamical, cosmological simulation. The image spans about 100’000 light years from left to right. Light emitted from stars reveals an ordered spiral structure that is traced by large amounts of interstellar dust.

Galaxies and the stars within them make up the "bright" side of the Universe. Weather permitting, thousands of stars, as well as several galaxies, are visible to the naked eye every night. These numbers increase dramatically with the help of powerful telescopes. Recently, the Gaia mission (http://sci.esa.int/gaia/) compiled stellar catalogs containing over a billion stars, while the Sloan Digital Sky Survey (SDSS, http://www.sdss.org) imaged hundreds of millions of galaxies. Since antiquity, people have marveled at the sight of stars and galaxies and speculated on their origins. It was not until about a century ago, however, that scientists fully grasped the extraordinary nature of galaxies. After measuring their distances accurately, it became clear that  galaxies were not nebulae of gas residing within the Milky Way as previously assumed, but rather that they are extragalactic systems on par with the Milky Way. Since then, the study of galaxies has become an integral part of astrophysics for a number of reasons. First, galaxies are the shining beacons that are observable out to large distances and, hence, can be used to map out the Universe. For instance, astronomers use galaxy catalogs to probe the distribution of dark matter and the growth of structure in the Cosmos. Second, galaxies can be used as cosmological laboratories to study physics in extreme environments. ‘Cosmic experiments' carried out by galaxies include the ejection of large amounts of matter in high-velocity galactic outflows, interactions and mergers between galaxies, or the suppression of star formation in massive galaxies, to name a few examples. Third, as galaxies are the environments in which stars and planets form, the study of galaxies is also connected to star and planet formation. Finally, the study of galaxies across cosmic time, allows astrophysicists to better understand the origin and history of our own parent galaxy, the Milky Way. Despite significant progress in understanding how galaxies and stars form over the last decade, there are many questions of paramount importance that have yet to be answered. These questions include:

Our groups at ICS study stars and galaxies often with the help of advanced computational models. Numerical simulations complement observational efforts and provide detailed insights into the physical processes that underlie the formation and evolution of galaxies and stars. High-resolution simulations undertaken at ICS explore the early stages of galaxy formation and map their properties to observation space, resulting in data that can be directly compared with observations made with the Hubble Space Telescope (HST), the Atacama Large Millimeter Array (ALMA), and the planned James Webb Space Telescope (JWST). Given the high computational demands of current state-of-the-art simulations in galaxy and star formation, we continuously refine our massively-parallized codes and make heavy use of supercomputers such as the Piz Daint machine at the Swiss National Supercomputing Centre. In addition, several of our group members are involved in a variety of observational efforts to probe the formation and evolution of stars and galaxies.