Ground-breaking simulation for researching the “dark” cosmos For the first time, scientists have succeeded in carrying out a cosmological simulation with several trillion particles. The simulation on the CSCS supercomputer Piz Daint provides an important basis for researching the universe with the Euclid satellite, which will be launched into space in 2020. 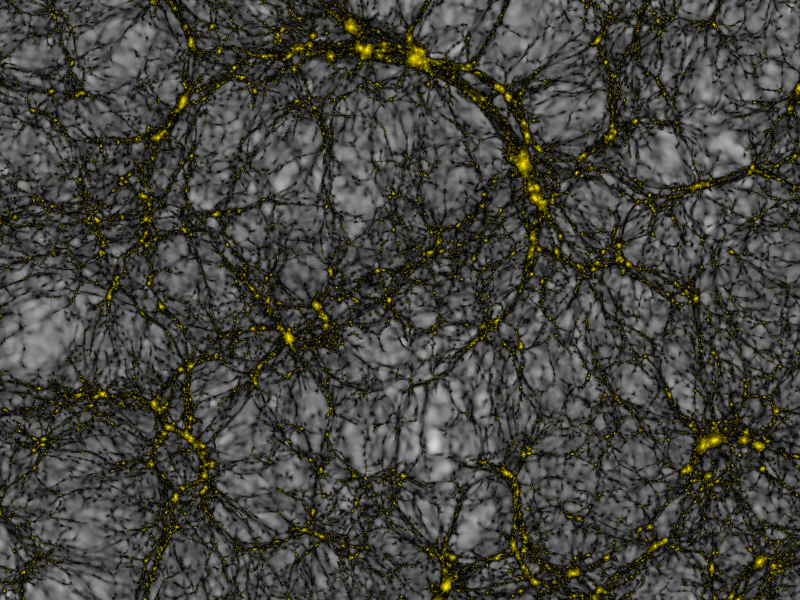 A small piece of the Simulation showing the complex formed by the dark matter through the action of gravity and the expansion of the Universe. White regions are the voids and the golden concentrations are the halos, where the density of dark matter is the lowest and highest respectively. These two extremes are delineated and connected by the filaments which are shown here in black. The golden colored dark matter halos host the galaxies in our Universe. The image measures 2.5 billion light years across and our entire Milky Way Galaxy would fit inside of a single golden colored pixel.

A slice through the invisible universe of dark matter is shown here extending from the present, located at the centre, to the most distant regions observable by the Euclid satellite, 10 billion light years to the left and right. The mission of Euclid will be to indirectly measure this network-like structure through the effect of gravitational lensing. Since light will have taken 10 billion years to travel from the left and right sides of the image to “us” in the center, we see that the Universe in the past looked considerably smoother, and that the large empty regions, known as voids, are much more prominent at the present.