The fourth generation of self-made supercomputer at the ITP represents the first real design update to the original zBox1 which was built in 2002. The number of cores and amount of memory was increased substantially over zBox3 and the very aging SCI Network replaced by QDR Infiniband. From the 576 cores (Intel Core2) and 1.3 TB RAM of zBox3, we now have 3072 cores (Intel Sandy Bridge E5) and 12 TB of RAM. While zBox3 was an upgrade of the main boards, CPUs and memory without making any design changes, zBox4 involved completely redesigning the platters which now each hold 4 nodes. The special rack which houses these platters was also improved with addition of a special nozzle to improve airflow and cleaning up the way cables are routed.

Planning for zBox4 began in the Spring of 2011, but these plans were partially scrapped in the late Fall of 2011 to await the arrival the Intel Sandy Bridge E5 chip with 8 cores and 4 memory channels per chip and main boards to support it. Serious planning began again in the Spring of 2012 and construction began end of September 2012. The dismantling of zBox3 and the construction of zBox4 was performed by volunteer students, postdocs and friends of the Institute, with even a few professors lending a helping hand. 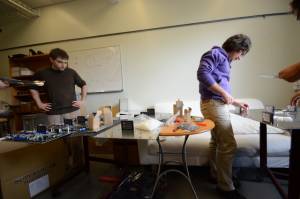 Doug Potter : co-designer and without whom this would not be possible!

Jonathan Coles : for helping oversee the construction, cabling and getting under the floor, and making the most amazing movie!

Elena Biesma (Supermicro) : for her continuous help and for organizing the special production of the motherboards for the project! 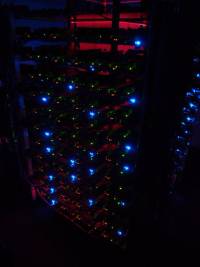 All who helped build it:

To all the Suppliers:

Faculty of Science at the University of Zurich, MNF (Prof. Daniel Wyler) for funding.

Markus Kurmann at the University of Zurich for handling the public tender for the CPUs.